The Rooster That Beat The Beatles 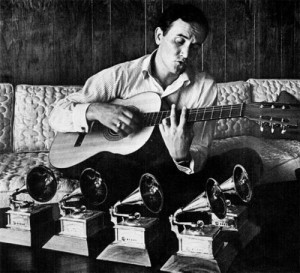 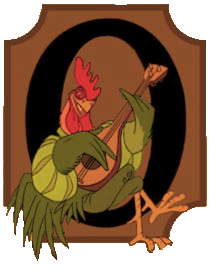 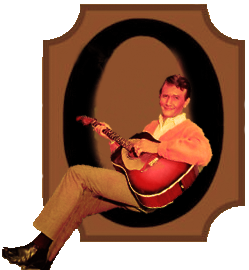 “Some people walk in the rain. Others just get wet.” – Roger Miller

When I was a little boy, my parents bought Disney’s ‘Robin Hood’ on VHS. The movie was already fifteen years old by then, but the old Disney animations are timeless like that. Me and my sister used to watch it all the time and we would hum along to the opening tune. It was years later that I would learn that the opening tune was Roger Miller’s Whistle Stop.

Roger wrote the soundtrack to the movie and voiced the part of Allan-a-Dale, the minstrel who joins Robin Hood’s troupe and narrates the story in one of the many versions of this legend. In true Disney fashion, Allan-a-Dale was portrayed as an anthropomorphized rooster. Every other scene, the cast would break out in song, usually led by Allan-a-Dale. After the opening sequence, the movie starts with Miller’s song Not in Nottingham, which I recently heard played by Mumford & Sons!

I remember first hearing King of the Road on the radio. I recognized that voice. As a Dutch kid born decades after Roger Miller’s biggest hit came out, I didn’t have a clue who he was. I went out looking for more music by this guy and liked everything I found: Dang Me, Chug-a-Lug, Do-Wacka-Do, England Swings, the list goes on. I know all of his songs by heart. King of the Road was a smash hit in a time when America was being invaded by British Music. He was able to compete with the Beatles and the Rolling Stones on the pop charts and snatched awards from under their noses. Even here in Europe he was popular, and even though many people say that King of the Road is the only song to cross the Atlantic in terms of cultural relevance, I think the Robin Hood songs have made quite a bit of impact as well.

This impact is compounded when you consider the Hampsterdance Meme that went viral in the late 1990’s. I was always keen on pointing out that it was a Roger Miller song. People in The Netherlands would go, “Roger Who?”, and I would say, “Roger Miller, you know, King of the Road. That’s who!” I wonder how Roger would have reacted if he was still alive when this early Internet Meme made one of his most insipid tunes a worldwide sensation…for the second time.
Roger Miller was a very versatile songwriter. He is often referred to as a crossover artist but as far as I’m concerned he never crossed over from anything. I’ve seen and heard him described as everything from ‘Country and Western artist with a jazzlike delivery’ to ‘Comedian singing novelty songs on TV’. He’s always written songs that were original, refreshing and unique.

Before he became a star, he was a songwriter for other artists such as the legendary George Jones. Even before that, he started out as a fiddle player. When I read that the fiddler playing Orange Blossom Special on one of his records was actually him, I was floored. Looking around on YouTube yields quite a few gems and I especially like the one with Ray Price below:


He ends it by huffing into the microphone like a dog. Miller was a master at ad-libbing complete nonsense like that in a very musical way. Some of his greatest hits feature this skill. When you’re done laughing you’ll appreciate him as a virtuoso scat artist.

I was looking for a recording to illustrate this when I found a video of Miller with Glen Campbell performing two of my favourite Miller songs, In The Summertime (You Don’t Want My Love) and Dang Me. Campbell, besides being a great player of anything with strings, can sing harmony like nobody’s business. He even manages to follow Miller halfway through one of his crazy scatting escapades!

https://youtube.com/watch?v=zHGs89TnMjA
One of Miller’s final efforts, a full scale musical called Big River, is equally filled with laughter. It’s based on Mark Twain’s The Adventures of Huckleberry Finn and has some really nice songs. If it ever hits a theater in my general vicinity I’ll be sure to check it out. Speaking about theater, playwright Oscar Wilde once said that life is too short to be ever be taken seriously. Miller certainly never did. Quoted as saying “My songwriting success…It’s just a sense of humor and a good outlook on life.”, Miller’s work radiates positive energy. He was quite capable of singing songs with more weight like Husbands and Wives, but always with a cynical twist and a healthy splash of humor.

2 Replies to “The Rooster That Beat The Beatles”

Thanks Tony! Will do.