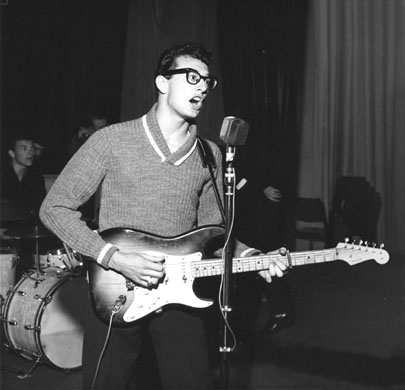 Buddy Holly never lived past the age of 22. Before he died in that terrible plane crash, he managed to write 40 songs and record a whole lot more.

He pioneered Rock & Roll, was one of the first to add symphonic layers to his songs and revolutionized the use of studio technology. He recorded a cardboard box as a bass drum just so it would sit well in the mix. Some of his songs released in the 1950’s sound more polished than recent recordings by modern artists! It is his songs, however, that live on today.

His love songs have always struck a chord with me. Head over heels in love? Rave on is your song. Plagued by doubt? Not Fade Away will convince yourself and Think it over will convince him or her. Feeling down and left out? Raining in my Heart says it all. Feeling betrayed? It Doesn’t Matter Anymore tells you how to deal with it.

That last one was written by Paul Anka, specially for Holly. I covered it in this video a couple of years ago. This song made me realize that you have no real control over a breakup once it has been set in motion. I wrote My Pride Waged a Battle when I realized what a fool I’d been for not knowing. I guess we all have to be reminded every now and then that we are masters of our own destiny.

For every stop on the train of love I could hear a Holly song, and even if you’ve fallen off that fickle ride, a song like Fool’s Paradise will urge you to get right back on again. Ride that choo-choo to the end of time, cowboy! The childish naivety present in his songs, an aspect that he acknowledged in the song Well Alright, belies a great deal of wisdom. Wisdom well beyond years he never reached.

A good, honest song inspires self reflection when there are no mirrors. Angry songs are a great way to channel negative emotions. Funny songs are great at putting those things in perspective. Holly had all of those and they have lifted and affirmed my spirits time and time again. I hope my songs can do the same.