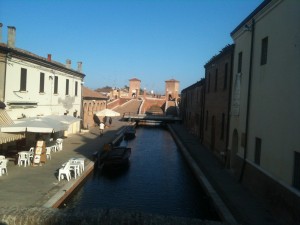 Comacchio in its dormant state

The next day, we were driven to Comacchio, an idyllic coastal town. There was a dentist’s office with a moat! After dinner, Comacchio came alive. What had been a sleepy town only a  few hours earlier was now a vibrant place. We played a three hour show with only a short break. We were soon told by our colleagues and new friends, the Bottle Boys from Denmark, that we should shorten our sets if we wanted to keep this up for ten days and live to tell about it.  They had been doing this for almost five years now, so we took their advice to heart.

On the way back to Ferrara, a rockabilly trio from Hungary called Naked Truckers, got really hammered. A prelude of things to come. These guys might have seemed a little like posers at first, but they were the real deal! 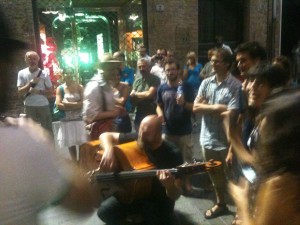 Karel of Roombah playing his full scale bass like a boss

The next day at lunch, we made new friends. First the delegation from Germany, a jazz trio called Sudwind, with the bass player doubling on… alp horn! They were very nice, gentle people. Next, we met the group from Barcelona, a Gipsy Swing band with an interesting blend of European folk styles called Saffran. They, along with the Czech band Rooombah, were always in for late night parties and jam sessions and when the festival ended it felt like I was saying goodbye to family. Great people and great musicians. Check them out!

We played a few shorter sets and it worked much better. Unexpectedly, our solemn arrangement of the old hymn ‘Amazing Grace’ managed to enchant the audience every time. Juxtaposed with a fast, upbeat version of bluegrass classic ‘Blue Moon of Kentucky’ and folk songs like ‘You Are My Sunshine’, we had a little bit for everyone. That night, we played on the big stage at the Ferrara music park. Despite a few problems with amplifying our washtub bass, it was a fun show!